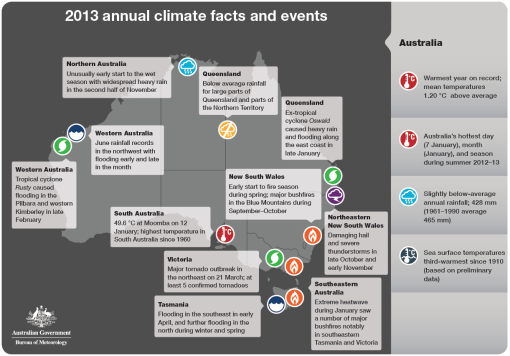 Last week the Bureau of Meteorology released their 2013 climate summary. It was no surprise that Australia experienced its warmest year since 1910, when records began. Globally 2013 was the sixth-warmest year on record. The annual global mean temperature has not been below average since 1985.

Continuous periods of hotter than average days signified the year, even during winter. While rainfall along the east coast and parts of WA were above average the interior and eastern parts of the country saw a return to drought conditions.

Australia witnessed some severe weather in 2013, records were broken and the impact of weather on our lives, properties and businesses has never been more apparent.

Here is a recap of the year that was and a possible view into what the future holds:

All data supplied by Bureau of Meteorology. Find out more at http://www.bom.gov.au/climate/current/annual/aus/2013/

Share on Social Media
← NGERs Reporting – the value of getting organisedIs it too hot to work? →