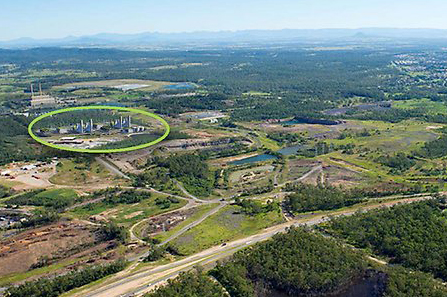 TRUenergy needed development approval to build a large combined cycle gas turbine power station with capacity of up to 1500MW to replace the aging coal fired power station at Swanbank.

Due to Katestone’s reputation for rigorous air quality assesments, we were commissioned on behalf of TRUenergy to assess the potential local and regional air quality impacts. The Blackstone Power Station was proposed to be located in the Swanbank Industrial Precinct, six kilometres southeast of Ipswich in the Southeast Queensland airshed, which is known to be susceptible to photochemical smog.

In Southeast Queensland, nitrogen dioxide (NO2) emissions from sources such as power stations can combine with volatile organic compounds to produce photochemical smog under specific conditions.

Katestone collaborated with the regulator to agree on the representative smog days and worst case emissions assumptions.

Katestone used the TAPM-CTM model to demonstrate that the impact of the new source of NOx on smog would be minimal under worst case conditions and assumptions.

The Blackstone Power Station Development was approved by the Ipswich City Council in August 2012.  Katestone also completed a parallel assessment for AECOM and TRUenergy for the Aldoga Power Station in Gladstone.