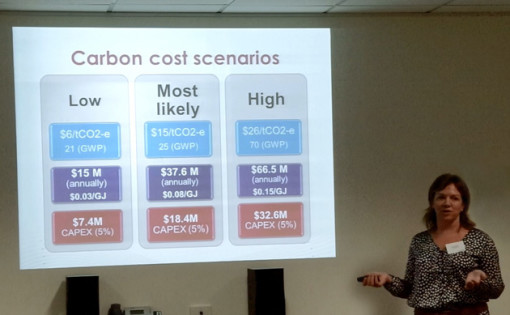 “Even if the carbon tax is repealed, NGERs will stay and the cost of carbon may just become an opportunity cost rather than a tax impost,” Lisa said.

Lisa explained how the National Greenhouse and Energy Reporting scheme (NGERs) included alternative methods for accounting for emissions, where each method produces a different result and varies in cost and complexity.

“Using direct measurement, Method 4, a gas company could find its emissions are twice or half as much, and it could spend $200,000 a year to find out,” Lisa said.

However, Lisa’s investigation pointed to carbon price being only one piece of a bigger puzzle.

“It seems obvious, but it’s often overlooked that a great way to minimise the cost of carbon is to abate your emissions,” Lisa said.

Lisa conducted a desktop review of an example CSG facility. Under a ‘most likely’ policy scenario, the facility would face $37.6 million per year in carbon costs. She found that if the company used combustion equipment that was 5 percent more efficient, it could save 19.3 gigajoules a year.

“The dollar value of saving that fuel was nearly ten times the saving from avoided carbon price,” Lisa said.

Lisa’s analysis showed how the company would be financially justified in investing $18.4 million in extra capital on more efficient combustion technology to realise the 5 percent efficiency gain and abate greenhouse gas emissions.

Share on Social Media
← EHP Greentape and CSG: ‘Am I crazy or is it these licence conditions?’Christine Killip selected for the Telstra Business Women’s Awards →